In addition to introducing new engineering undergraduates to the world of environmental engineering, I continued conducting research at the University of Florida, but this time in solid and hazardous waste management under my advisor, Dr. Timothy G. Townsend. My undergraduate experiences working with activated carbon inspired me to pursue a PhD, but I found that my interests pulled me to search for smart, sustainable solutions for our problems with solid wastes of all kinds, especially with those that are hazardous to the public and the environment.

My first project involved working on analyzing litter data for 2015 for a watershed in Florida. The purpose of this project was to develop a methodology that local organizations could use to mitigate their litter problems. The methodology I crafted is based on theory and practicality. Based on my literature review of multiple studies and the methodologies they used and site specific details of the watershed (e.g. rural/urban environments, prevalent litter), I created a custom methodology that utilizes an app already on the market that is free for both iOS and Android users. Using this app, users can map each piece of litter using GPS coordinates on the user’s phone that they encounter and categorize it according to type of item (e.g. paper bag, plastic bottle) and broader characteristics (e.g. common litter, fishing gear, other misc. items).

Because each litter item has GPS coordinates associated with it, these items can be mapped using software such as ArcGIS or even through Google Maps to show the distribution of the litter at a given site such as a park or a riverside. Based on this, better preventative measures can be taken such as adding new trash receptacles or increasing receptacle pickup frequency. Best of all, this project gets the local public involved, as they are the ones who can go around and record this data – thus making them active participants in shaping the world around them and resolving the litter issue in their neighborhoods. My methodology is easily followed by professionals and volunteers alike that provides a system of qualitative scales yet limits subjectivity of grading via photographs along with instructions on how to use the app and other tools (i.e. data cards) to record data. Furthermore, I conducted a case study using data from one site in the area showing how this methodology elucidates details on how to increase litter collection showing the status of waste receptacles, the number of waste receptacles, and where these are with respect to other collected litter items with these also conveying important information such as what they are and what category (e.g. common or fishing gear) they fall under. Lastly, I included potential next steps for their cleanup efforts. These included innovative devices such as the Seabin, a device that cleans up floating litter and oils/detergents from the surface of the water via pump, and future study ideas such as prioritizing litter pickup of items based on parameters like toxicity.

Simultaneously while working on aquatic litter, myself and a colleague started a project on reusing waste-to-energy (WTE) residues, or ashes, in road construction materials: asphalt concrete, Portland cement concrete (PCC), and road base. Each of these materials are unique in their usage. Asphalt and PCC are used as pavement material on top of a foundation, or the road base. 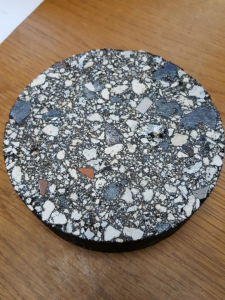 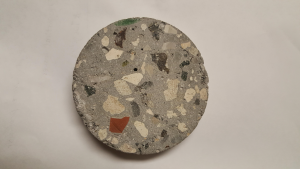 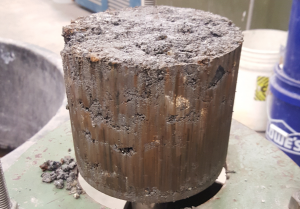 Aggregate road base made with entirely WTE ash.

The first consideration for this project is understanding the WTE ash material and preparing it to be used in these road construction applications. By nature, WTE ash is a considerably variable aggregate. It is full of glass, metals, ceramics, and a little bit of unburned material. However, depending on the facility it’s coming from the percentages of each of those components within the ash can vary due to local recycling efforts and consumption behaviors of nearby residents and commercial activities.

For research, it is extremely important to have a representative sample of our test material. To achieve this, a composite mixture of WTE ash from a Florida facility was created by taking approximately 10 tons of ash per day for seven days and stockpiled. Each of these stockpiles were sampled and then all piles were mixed thoroughly together and this new composite mixture was sampled. Sampling involved performing a gradation through sieving analysis using different sized sieves from 1.5” all the way down to the No. 200. From this information, we determined the average gradation of WTE ash from this facility, which allowed us to determine which size fractions to use for road base, concrete, and asphalt applications in order to maximize the amount of material that could be used.

The goal of having these different “blends” is to have a high strength due to particles interlocking with one another while minimizing the amount of fines. The fines, which is mostly fly ash, typically contains a high amount of heavy metals that can wreck havoc from an environmental standpoint. This situation is especially problematic considering that road base is an unbound material and water readily percolates through this layer relative to concrete or asphalt leaching out possible contaminants with it.

However, we learned from experimentation that you must have some of this fine material or else you will not have a high enough strength, or limerock bearing ratio (LBR), to meet Florida specifications for use. Both mixes with fines added exceeded the minimum LBR requirement of 100 for virgin aggregates while the coarse only blend was significantly below 100. 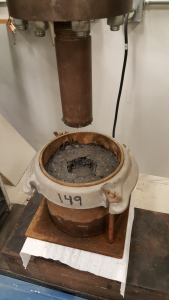 As for using WTE ash in PCC and asphalt concrete, mix designs were developed with the 1/4″-3/4” ash utilized as a coarse aggregate replacement at various percentages:

For asphalt concrete, we developed a mix design that followed the SUPERPAVE method, which involves having a total aggregate mixture gradation that falls within the control points specified for each size fraction.

Another component of SUPERPAVE is having an asphalt mixture, the aggregate and bitumen, that meets the range of volumetric parameters: air voids, voids in the mineral aggregate (VMA), voids filled with asphalt (VFA), and the dust-to-binder ratio. Briefly, here’s a description of each of these parameters and the acceptable ranges:

It is important to acknowledge that some of these parameters may change depending on the SUPERPAVE traffic level being designed for. Notably, VMA and VFA ranges will change slightly.

To determine these volumetrics, we ran two test methods: the “Rice Test” and the bulk density of gyratory prepared asphalt specimens. From these methods we determine two key values: maximum specific gravity and bulk specific gravity. 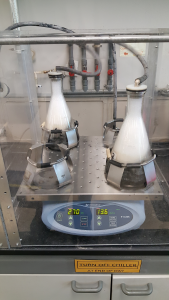 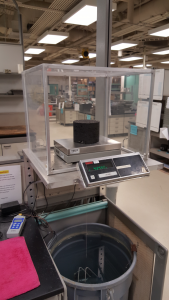 From these two values, we can determine the volumetrics described above! Overall, our new ash amended asphalt mix meets all parameters except for VMA. The concern with not having an adequate VMA is that not enough asphalt can be incorporated into the mix, decreasing how much asphalt surrounds each aggregate particle, or decreasing film thickness. Hence, there may not be enough asphalt “glue” to hold the aggregate mixture together and pavement durability may be an issue.

To address this concern, we performed what is called an Asphalt Pavement Analyzer (APA) test on our asphalt mix. Essentially, asphalt specimens are preheated to maximum pavement temperatures for several hours and then a loaded bar is placed on top of them. A wheel then runs over this load for 8000 cycles forming a rut in the specimen. The depth of this rut is recorded over each cycle and at the end of 8000 cycles this depth can be correlated to actual in-service performance of the asphalt mix itself! 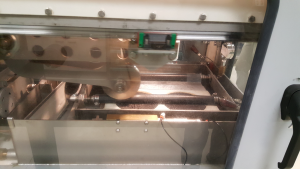 Once tested, our ash amended asphalt performed as well as similar Florida mixes. Importantly, it falls well below the standard placed at the Florida Department of Transportation (FDOT). The increase in rutting may also be attributed to the fact that more asphalt bitumen is added to the ash amended mix than the control sample. This addition of bitumen is also one of the drawbacks of using WTE ash in asphalt. However, this is counteracted by reusing a waste product (the ash) and hence the decreasing the use of virgin aggregates – saving natural resources!

Results from these tests show that while increasing WTE ash as a coarse aggregate replacement decreases concrete strength, even at 100% replacement the concrete is still strong enough to meet FDOT Class 1 structural concrete minimum strength of 3000 psi. However, if a factor of safety is considered then this would likely not be the case but for lower replacements of ash (15%, 30%) this could make a viable product. Furthermore, all samples show adequate tensile strength considering the “rule-of-thumb” that it be at least 10% of compressive strength. So for example, if FDOT Class 1 concrete must have a compressive strength of 3000 psi, the tensile strength must be at least 300 psi – which all ash amended concrete samples met. Like for compressive strength though, the more ash that is added, the weaker the concrete is. For ash replacements above 50% it is unlikely that such a mix would work in practice without additional tweaking.

The reasons for the lower strength of concrete are likely due to the aluminum and glass within the ash. Aluminum reacts within concrete to form hydrogen gas bubbles which make the concrete much more porous and prone to fracture. Meanwhile, glass contains silica, which contributes to a deleterious reaction called alkali-silica reaction or ASR in concrete. ASR forms a gel-like substance within the concrete that causes it to expand leading to structural failure.

So why does it matter?  Success with beneficial use of WTE ash in road construction products means saving landfill space and prolonging the lives of existing landfills! This is particularly important in regions where new landfills cannot be built due to lack of space, economics, or environmental factors. Additionally, reusing WTE ash means less virgin aggregates need to be mined which helps preserve natural resources and reduce greenhouse gas emissions associated with extracting, processing, and transporting these materials!

Find me on Linkedin!